Climbing the wall of worries

One of the most followed strategists on Wall Street, Marko Kolanovic from JP Morgan, is one of the few taking a bullish stance and predicting US stocks will rally in the second half. His argumentation is that, on the one hand, valuations are still relatively cheap and, on the other hand, “the phase of bad data being interpreted as good is gaining traction…”. It is hard to argue against the second part of the argumentation because we cannot possibly forecast investor’s reaction to bad news. However, what we know is that economic data remains weak and earnings forecasts are being revised downwards as companies deal to the current environment of inflation, labour shortages, supply chain issues and higher interest rates, let alone geopolitics and energy supply issues in Europe. We believe it takes a lot of optimism to believe equities will easily climb this wall of worries. 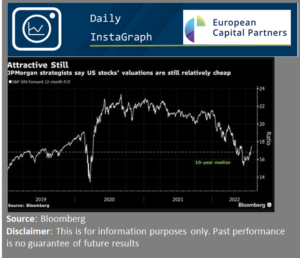