The predictive power of the slope of the Treasury yield curve for forecasting recessions is well documented in the academic world. The yield-curve slope turned negative indeed before each economic recession since the 1970s. We note that the yield curve, as measured by the difference between the 10 year and 2 year US government bond yield, is currently the most inverted since 1981. So market participants believe that the Fed will raise interest rates too far and hence engineer a hard landing in an already slowing economic environment. The message of the bond market is clearly one of prudence as 2023 could become a challenging year for the economy overall and for US companies in particular. 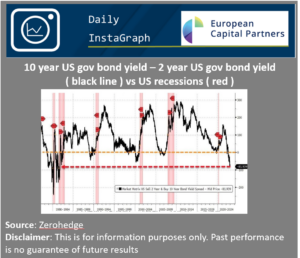