Baby’s got the ( Summer ) Blues

The economic news that came out of the biggest economy in Europe over the last days is not encouraging. Firstly, the German manufacturing and service PMIs are now below 50, in contraction territory. Secondly, retail sales dropped 9.8% y-o-y in June, the biggest fall on record for this data. Thirdly, German electricity prices continue to soar and have now quadrupled since October last year ( German power for next year on European Energy Exchange AG per Megawatt-hour ). And now we read the level of the Rhine river has fallen to lowest levels since 2018. Another 10 cm fall in the water level and the Rhine becomes impassable. According to analysts from JPMorgan, the last time water levels were so low in 2018 it cost the German economy 0.4% in GDP! Baby’s got the (Summer) Blues. 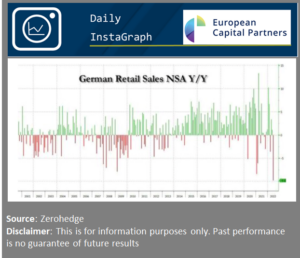