Warren Buffett proposed in 2001 market cap-to-GDP as a yardstick on how expensive / cheap an aggregate stock market is. He described the ratio as “probably the best single measure of where valuations stand at any given moment” ( source: Wikipedia ) . Idea is that this so-called ‘Buffett indicator’ is a more stable and undistorted measure than for example price-to-earnings. The conclusions drawn are however the same than the ones shown in our Daily Instagraph yesterday: the US market is more expensive than its long term average and trades at a substantial premium to the rest of the world. Outside of the US, equity valuations appear back to normal. 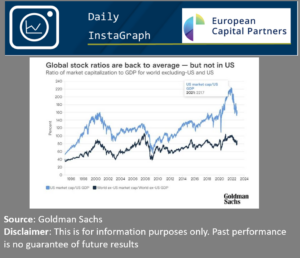