The ECB has started to tighten by raising interest rates for the first time since 2011 and reducing its balance sheet by concluding its bond-buying scheme. Behind the curtains however, the ECB has been supporting Club Med bonds. This is partly explaining why the spread of Italian to German 10 year sovereigns bonds has dropped from a peak of 240 bps to 214 bps now despite a major government crisis in Rome. The ECB is indeed using the proceeds received from maturing ‘northern European’ bonds to re-invest them into Italian, Spanish and Greek bonds. This ECB castling looks to us like band-aid with limited impact but it appears to bridge the time before more powerful anti-fragmentation tools are being put in place. 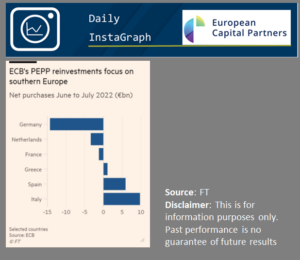