As stock markets were celebrating yesterday’s weaker than expected July CPI print with a S&P 500 up 2.1% and a Nasdaq rallying 2.9%, US President Biden tweeted : “July’s 0% inflation and last week’s booming jobs report underscore the kind of economy we are building – an economy that works for everyone.”. As the old saying goes, if you torture the numbers enough, they eventually give in. We think that inflation remains an issue and that the Fed will continue to tighten. Just consider the 2 following points: 1/ The beat was mainly driven by lower-than-expected rental cars prices, used car prices, air fares and fuel, the most volatile parts of CPI and 2/ if we would compute the CPI in the same way than Volcker did in the 80s, it would now be above 16%. We have not arrived in Wonderland (just yet). 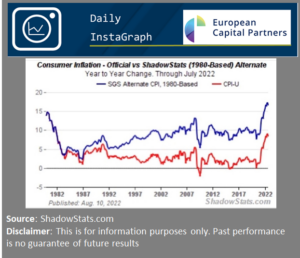