The long-awaited US CPI numbers were like red hot chili peppers: 9.1% up from a year earlier in a broad-based advance, above estimates, the largest gain since the end of 1981 and hotter than Mexico’s. Core CPI of 5.9% is also above estimates. The result: an inverting yield curve and some investors bringing now a 100 bps rate increase in July in play. It is apparent that these numbers do not make the job of the policymakers easier: if they reign in inflation by stepping on the monetary brake to harshly, they risk a hard landing of the economy. If they are not increasing enough and as they are already behind the curve, inflation may run further out of control with the specter of stagflation arising. The only weak consolation is that, at least historically, peaks in inflation tend to be transitory. We believe the economy will remain hot over the Summer. Let’s see in the upcoming result season how the companies are coping with these prices. 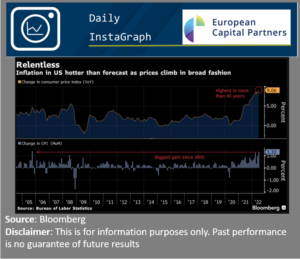