Today’s graph from the 80s shows the behaviour of the S&P 500 around the Fed pivot moment, when Fed Chairman Volcker suggested in October 1982 that the Fed “may shift tactics” on interest rates. The S&P 500 actually bottomed 2 months before the event and had erased its entire decline in 4 months! As Mark Twain is quoted: “History does not repeat itself, but it does rhyme.” Translate this graph into today’s world, the rebound around Fed pivot could well already have started and be a fast one. 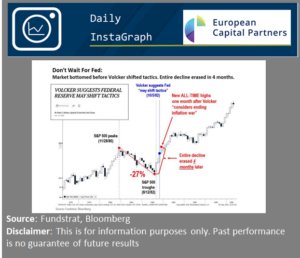