The (wo)man with the hammer

The long-awaited press conference from the ECB did little to appease the pressure on the bond yields in the so-called club Med countries, most prominently Italy and Spain. While not yet reaching the levels seen during the Euro-crisis, Italian bond yields are back to levels seen during the political turmoil in 2018. With the benefit of hindsight, the ECB ( like the Fed ) is late to start tightening by raising rates and stopping asset purchases as inflation already runs hot. “To a (wo)man with a hammer, everything looks like a nail” in monetary policy means that a common monetary medicine for the Eurozone will have disproportionate side-effects in the club Med countries as their economies are highly leveraged, structurally weak and the ECB is the main buyer of their debt. So calls for more sophisticated monetary tools with less side-effects for the Southern countries get louder and louder. There is no limit to imagination when it comes to expanding the toolbox of the ECB : now anti-fragmentation/stability tools are the latest buzzword. To us, the current situation rapidly deteriorates into another test to the foundations of the Euro as a common currency. 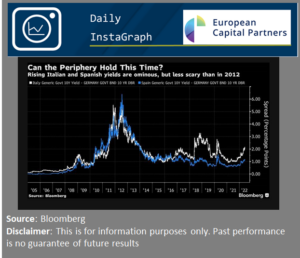