Trouble in the South

The political drama unfolding in Italy has more and more the allure of a grotesque mixture between a Greek tragi-comedy and an Italian spaghetti western. There is a lot at stake for the third largest Euro-area economy with a debt/GDP ratio of 150%. There is also a lot at stake for the Euro and the economic stability of the Eurozone. While hedge fund managers around the world are toying with a short Italian bonds – long German Bund trade, all is however not lost. Average debt maturity is above seven years and gives some time before refinancing is needed. The anti-fragmentation tools that are being discussed by the ECB could also offer some relief ( and already brought Italian yields down recently ). Italian 10 year yields stand at 3.23% this morning up from 1.23% at the beginning of the year and the spread to the German Bund is now above 200 bps. These are not the crisis levels seen during the debt crisis but raise concerns. Hopefully Draghi can muddle through. 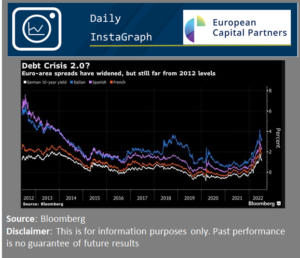