According to Zerohedge/Kpler, Russia is now exporting more oil than before the invasion of Ukraine. Europe and the US have been largely substituted by India, China and Turkey. At the same time, according to German Spiegel, volumes of Russian gas imports to Germany are running currently at ¼ the level of 1 year ago. With soaring gas and electricity prices, economic implications for industrial and private consumers are starting to be felt painfully. By weaponizing energy, the Russian government is testing Europe’s willingness to defend Ukraine. To us, it is clear more economic pain lies ahead. 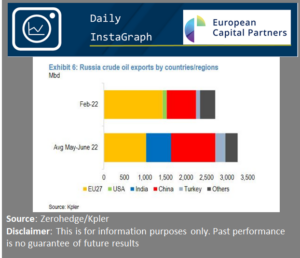