The employment figures for July that were published last Friday were unarguably very strong with the US economy adding 528,000 jobs and the unemployment rate returning to a half-century low. However, as David Bailin, CIO of Citi Global Wealth, pointed out there is zero lead time between rising unemployment and the onset of new recessions. In other words, the moment the employment data deteriorates, a new recession could already be underway. In light of the job surge, the Fed may even be inclined to take a more hawkish stance and increase rates faster to fight inflation. 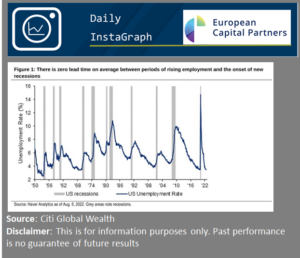