Inflation numbers are improving in Europe. Over the last week we had weaker than expected and slowing inflation numbers in Spain and in Germany. Yesterday came a CPI print at 6.7% for December out of France, still high but showing French inflation unexpectedly slowed from a year earlier after record increases of 7.1% in October and November. Are we seeing peak inflation? It may be a little early to tell with 1/ a warmer-than-expected start to winter 2/ technical factors like the French fuel discounts distorting temporarily 3/ core inflation still increasing and 4/ upcoming wage and pension reform negotiations. One swallow does not ( yet ) make a summer. 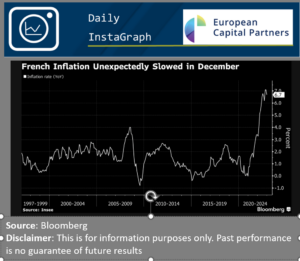